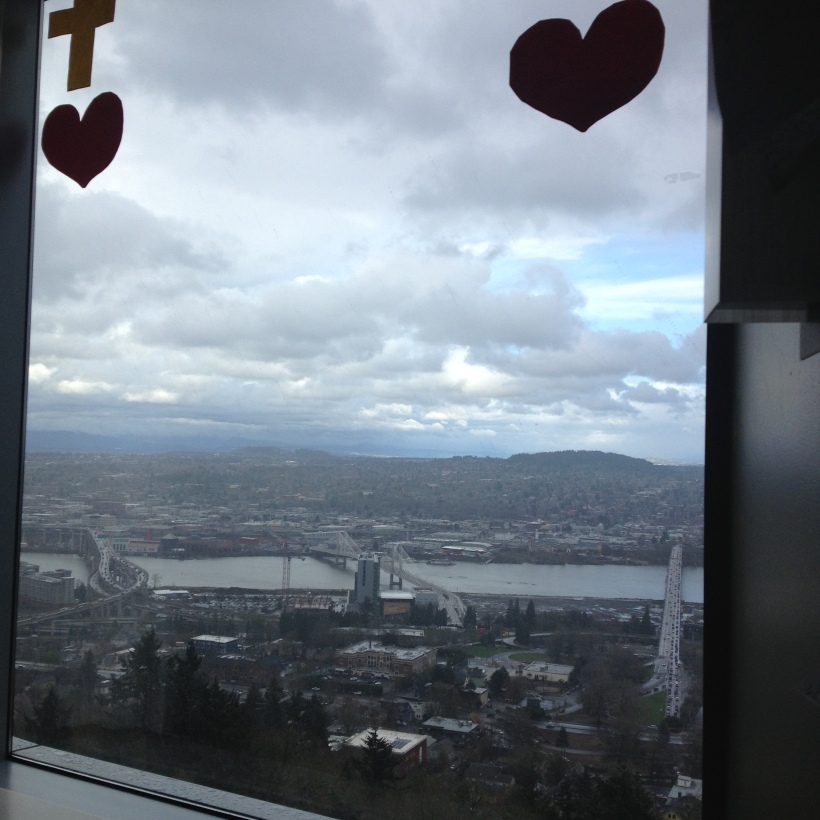 Today Josh got his last dose of a drug that prevents graft vs. host–its a low dose type of chemo.  He doesn’t usually have a problem with this one.  He has been reacting to the white blood cell infusions though.  He had a rash on his body, so they decided not to give him any white cells today.  He tends to have allergic reactions. In the past, they have given him Benadryl for it.  We are still waiting and praying for his bone marrow cells to en-graft well.  As far as energy is concerned, Josh is doing very well. He walked another two miles. He says his goal is to walk one before I arrive; then walk another one together.

Katelynn, the boys and I had the privilege to have lunch after church with some dear saints from our new church at a delicious Vietnamese restaurant.  We enjoyed getting to know them better.  Thank you, Gordon and Bonnie, for your kindness to our family and faithful prayers! Thank you Clackamas Bible Church for your prayers and support! Katelynn is doing a wonderful job with the kids.  Noah is doing very well and will get to visit with Josh tomorrow.  Nathan is still sick with a little cold and has been fussy.  Please keep them all in your prayers.

When I got to the hospital after lunch Josh was already napping, so I waited for him in the lounge.  As I was surfing the net, one of the other patients, a 30-year old man named Zach came in.  I  had seen a few times before, usually accompanied by an escort worker from the hospital and talking about wanting to go smoke a cigarette. The patients on the unit are strongly discouraged from smoking since it causes cancer, plus it’s an indoor unit with strict isolation precautions.  In the two weeks that Josh has been, they’ve only allowed him to go onto another floor once and that was to receive radiation.  Zach remarked how he usually sees me on the treadmill.  I told him I wasn’t on the treadmill because I was wearing heels since I had come directly from church. He commented that he wishes he could go to church.  I told him my husband was a pastor and could visit him if he’d like.  He said he would really like that and for him to pray for him.   Then, he invited his escort Rachel and I to play a game of bowling with him on the Wii Fit in the lounge.  We both agreed and had a great time playing.  They both beat me, but it was still a joy to see Zach have fun.  It was an even greater joy to see Zach receive the healing balm of the gospel later when Josh joined us.  Josh got the pray for him, then he asked for prayer for his mother and brothers that are grieving him. So Josh prayed some more…  Then Zach wanted to pray for Josh!  His prayer was one of humbleness and it brought a tear to our eyes.  He acknowledges that he had fallen away from walking with the Lord and wanted to be restored.  Please keep Zach in your prayers!

Josh is making friends, blessing others including myself with his sense of humor & love; and time is just flying by day by day…  This is such an answer to prayer as he was in agony when time seemed to tick slowly every hour.  We got to finish the rest of the movie Inn of the 6th Happiness–it was a great picture for the time period in which it was filmed, even though I learned it didn’t reflect the true story as accurately as it could have.  Nonetheless, it was an inspiring story of faith through Christ and courage despite amazing difficulties and suffering.