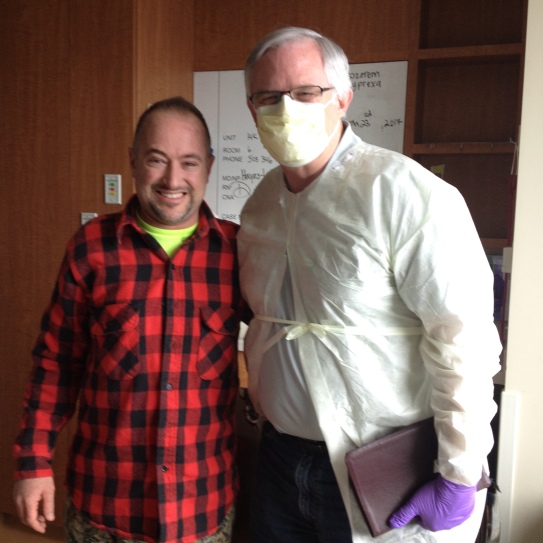 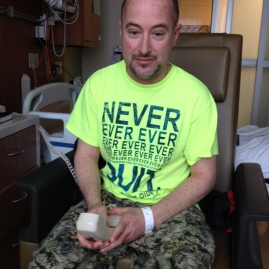 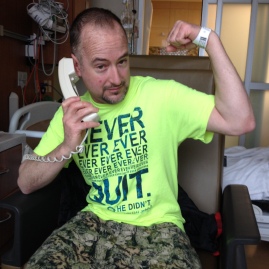 The Lord continues to amaze me of little faith. He is able to move mountains and has the power to invigorate with life as he wills.  Today God renewed Josh’s strength so that he was soaring like an eagle! In the morning he said he felt the best he’s ever felt during his extended stay here at OHSU Inn, even before he came into the hospital! He described it as a surge of energy that was almost like he was on a high.  He walked about a mile and a half and got to share the gospel with a fellow BMT patient who had his transplant the same day as Josh. I had the privilege of coming alongside my beloved old man’s side for some of his walks and hearing him give a broken man the hope of the eternal life in Christ.  We give credit to God for this awesome answer to prayer! For the first time yet, Josh also had a good nights sleep without any nightmares. In fact, his dreams were actually pleasant! Some people around the unit and some of the nurses had warned us that around Day +5 thru Day +10 Josh may hit rock bottom.  Today Josh’s nurse told us he doesn’t necessarily have to hit rock bottom; especially considering he’s already hit a low early on.  Thus, we are hopeful that the worst is behind us now.

At about noon, our new friend Doug came to visit Josh once more, and before that, the chaplain had come in to encourage him and vice-versa.  Josh really got a kick out of having him read Scripture in Hebrew, as well as asking him some pretty intellectual questions on the Greek language and textual criticism.  By about 1:30p.m. Josh was wiped and took a long nap to try to recoup! He never did quite regain as much energy as he had in the A.M.; however, he still did much better than before.  Even though visits and exercise are draining for Josh, they also are what keeps him going!

Back at home, Katelynn found a rock painting group in the area and took the boys to a local park on a hunt for painted rocks. Later, they did some paint shopping in order to disguise their own rocks and hide them for other kids to find. They were thrilled! These little things make such big difference! Tomorrow, our friends Doug and Linda are taking the boys and Katelynn to a children’s museum!  We’ve been so blessed to gain eternal friends like the these through this momentary affliction.  Also, our sweet new neighbor Maureen from across the duplex brought us a delicious meal this evening! Thank you, Maureen!  It was so nice to not have to rush home from the hospital and cook dinner.  We thank the Lord for his abundant love and goodness to our family!